As some of you may know, Brent is a Career Changed, Guide Dog for the Blind dog, that has been my full time pet since the spring of 2005. The inspiration for PetFlight, Brent is now approaching seven years old, but still leads a full life of sleeping, hiking, the occasional swim, and then more sleeping. A few weeks ago I noticed a bump on the tip of his tongue. It was not very big, just about the size of a small pea and was the same color of his tongue.

I assumed it was just a cut or an abrasion and expected it to heal on its own. Two weeks later the bump was still there and did not seem to be getting better so I decided to take him to the vet to make sure there was nothing wrong.

The vet initially stated that he was unsure of exactly what it was, but that the solution for almost all growths on the tongue was to remove it, so I scheduled surgery for Brent later that week.

On the day of the surgery Brent was dropped off at the vet clinic at 8:00AM. He had no problems going into the kennels, but was unhappy about missing his breakfast, which is tied with dinner for his favorite meal of the day.

The growth on Brent's tongue was removed without incident, his teeth cleaned, and the surgery was a success.

I picked Brent up just before 3:00PM and he seemed in good spirits, relatively unaffected by either the anesthesia, the missing part of his tongue, or the surgery.

Brent’s recovery was quick. He had one week of limited activity and two weeks before he could chew on a rawhide. He doesn’t seem to notice that a small part of his tongue that's missing and he still loves to give you lots of kisses. 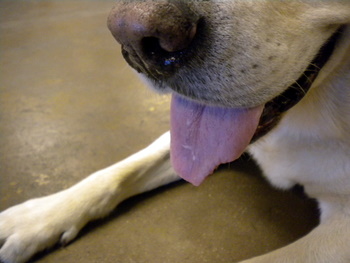 The growth from his tongue was sent off to a lab for diagnosis. This process was not as easy as expected. After waiting 3 weeks and going through 2 different laboratories, both results indicated it could be either a malignant melanoma or a plasmacytoma. The sample was then sent to Michigan State University for a special staining process where the final diagnosis was returned, low grade amelanotic malignant melanoma.

The fact that the growth (tumor) was low grade is good in that it is less likely to spread. The margins of where the tumor was removed were clean and showed no sign of cancer cells, which is exactly what you want.

Brent’s vet consulted with a local oncologist and it was decided that his lymph nodes should be checked every 6 months for any signs of enlargement and a chest x-ray should be performed every year. After further discussion with the vet it was decided to sedate Brent during the lymph node visit and do a thorough review of his mouth and throat to insure there aren't further growths forming.

In 50% of cases with malignant melanoma where the tumor is completely removed, it can reappear. But I am hopeful that the early detection combined with the fact that the tumor was low grade will swing the odds in his favor. At this time Brent’s prognosis looks promising.

What you can learn from Brent's Experience

Make sure you take a few minutes each month to do a quick physical exam for all your pets and take note of any growths or changes. Several doctors commented that the early detection of Brent’s tumor likely saved his life.

Map of all airports that have reported an air travel, pet related incident.

PetFlight DOES NOT ship pets. Did you receive an email claiming to be from PetFlight?